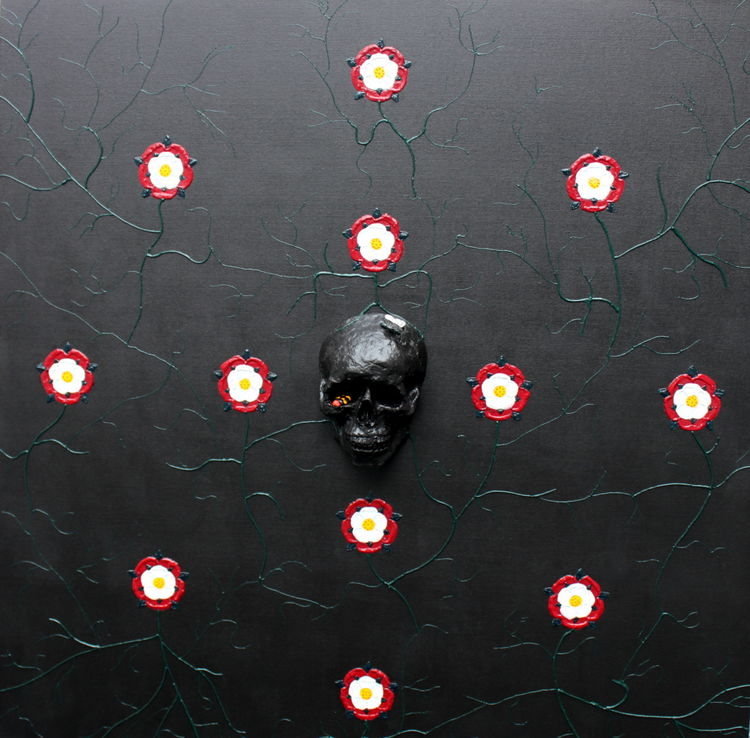 This painting illustrates the interconnection of all things which provide the ‘natural’ order in our lives, as well as the duality of order and chaos, light and dark. ‘Ring o’ Roses’ expresses a moment in history when order was turned on its head, and with devastating consequences. The Great Plague 1665-1666 demonstrates the fragility of our order, well-being and the overarching power of its opposite, chaos, and the way that our environment can turn on us. The butterfly represents the human soul and the beetle emerging from the eye socket reminds us that in the end we all return to the earth, that after chaos, order is again restored, and that death however frightening forms part of that natural order. The vine represents the flames of the Great Fire of London and their power for purification, that helped to destroyed it. The darkness of this piece is juxtaposed by a copy of a letter, sealed inside the skull, from Henry Muddiman (journalist) to Joseph Williamson (politician) in Charles II’s government. It provides a lighter moment in this dark tragedy which appealed to the dark side of my humour, when relating to such a dramatic and destructive event. The letter numbers the dead and notes:
“This Bill had numbered one more but for a remarkable providence which was thus. A Butcher in Newgate Market being by the Searchers given out to be dead of the Plague and by the neglect of the Boarders not carried away the same night was laid out in an upper room wither his daughter going next day the father beckoned to her and bade her being him ale for he was cold. The daughter called up her mother who giving him clothes, the man took a pipe of tabacco (sic) eat (sic) a rabbit and on Sunday went to Church to give God thanks for his preservation.” Source: National Archives.